There are three important things in life: (1) career, (2) ministry, and (3) surrender. Most of my friends are on track with (1), a few are on track with (2), and people like Heidi Baker and Todd White are in category (3). With as much enthusiasm as I have for the important things in life, I find that “Christians” have a tough time with people being “Christian” in unfamiliar ways. I’ve been spending some time thinking about surrender and surrendering these expectations over. However, as surrendered as I’ve been, it’s already quite different than mainstream Christians in Silicon Valley. So, maybe I’m arriving all in due time and I should just trust the process.

Most recently, I was at this medical conference targeting the Palo Alto and Stanford area. It’s encouraging to see intellectual merit working alongside these testimonies and miracles. Our knowledge and reasoning will help properly steward such phenomena. 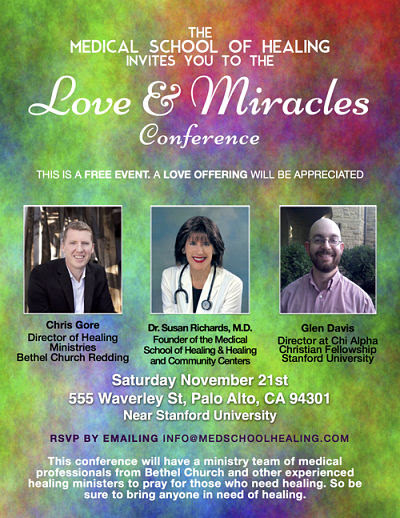 Right before going, I watched a Kickstarter on such topics, where a guy from Bethel is making a documentary with medical experts, leading experts, and intellectuals. He said something along the lines of how Charismatics feel that no one can reach the intellectuals.

On one hand this is totally #intellectualfaith! On the other hand, I’m still so unsure of what I’m supposed to do with myself, it’s like I’m missing the party. More than anything, it seems in the short term, I’m just looking for a place to belong.

When I showed up at the event above, the first guy I saw happened to be the same one in the Kickstarter. His name is Elijah and he prayed for me. He spoke over me that I was a catalyst and had an Esther anointing. I gladly took all the encouragement I could get.

Prior to that, I was at another Bethel conference in regards to heaven in the workplace. It’s nice to hear that surrender doesn’t mean that you just idle away. It was also nice to get prayer in regards to tackling the big projects in life. The guy I prayed with there said that there may be seeds of self-sabotage that we carry with us. Things don’t need to seem so hard. At least hard isn’t what I hear when Heidi Baker or Todd White talk from their place of surrender.

I saw a lot more miracles when I felt more of a belonging to my surroundings. My intellectual Christian friends aren’t quite in the pursuit of greater faith to the degree that I do. I bring them to some of these Bethel meetings, and it’s a miracle that they even come.

Just the other day at Jubilee Church, I met a woman I prayed for a few months back, she said her leg had been healed ever since. Amazingly, she recognized me as I sat right next to her, my first time visiting the church. It’s nice to have a miracle to share here and there.

Anyhow, after the medical conference, I felt that God wanted me to blog again, so I did.