This post is about two organizations I never joined: Invisible Children and the International House of Prayer, and their unfortunate circumstances– narratives that took some ugly turns.

It was in 2006 (or something). Lanny calls me to see if I wanted to catch the bus to go down to DC for this group called Invisible Children. It was, I believe, the Global Night Commute, where we’d write letters to the government about how it’s not ok that there are child soldiers in Uganda. I must’ve watched the documentary that came out a couple years earlier. Regardless, I didn’t end up going with Lanny.

Documentaries later, Zwak, a good friend of mine ended up working for them. I visited him once in San Diego and he took me around the offices. I met many of the volunteers– young, well-intentioned, and passionate about social issues. It wasn’t a Christian organization, but the founders mostly were, and so were the volunteers. That evening, we went to a Switchfoot concert, where I snuck Zwak back stage to say hello.

I had always regretted not going with Lanny to the Global Night Commute, even though there were other subsequent movements. I was always left with a sense that I’d missed out on something world-changing. In some ways, I certainly did. I envied those who on the road for Invisible Children, putting together these videos that inspired so many. They were changing the world.

Three film-makers go to Uganda to discover a story that’s changed the world and so many lives.  I have a few friends who were roadies for the Invisible Children non-profit that emerged from the film, and their stories are more captivating than any reality TV show or modern fiction.  The film-makers are indeed great storytellers, but they’ve given over authorial control and engineered their experience to be driven by interactivity.  On one level, anyone can volunteer and be a prominent acting agent.  In so many other ways, events and ideas are employed to gather as much participation as possible, all the while authoring the story as it unfolds.

That was maybe their problem– that they were primarily good storytellers. Years later, when they really hit their prime, does the intellectual (mostly liberal) media (including my friends) find them worthy of being scrutinized to infinity and beyond. My cohorts are extremely skeptical of philanthropy, altruism, and humanitarian efforts.

In 2012, I’m happy for Invisible Children, and at the height of my regret for not being more involved, I change my FB picture to the above Kony 2012 image. I might have kept it up for a few days to a week when I decided I’d made my point and taken it down. Within 24 hours, the news hit that the lead spokesperson for Invisible Children has a nervous breakdown.

Ten days after the original video was released, a naked and screaming Russell was held down near a San Diego intersection until police arrived. No charges were filed.

Following the meltdown, Russell told the Los Angeles Times he spent six weeks in care facilities before he returned home and kept a low profile.

Russell, 33, is a filmmaker by trade and works full-time as a creative director at his organization, Invisible Children, which he started with two college friends in 2004. He is the married father of two children and resides in San Diego, Calif.

To which, months later, Jason Russell responds: “My mind betrayed me and I was hospitalized. If you’re put in the position to give answers to every question a dozen times over, your mind starts to lose track of where you are, if you’ve slept, who’s for you, who’s against you.”

Invisible Children became a laughing stock among my colleagues. It was really sad that such powerful storytelling wasn’t set up to withstand the absurd amounts of intellectual criticism. For me, it felt more like a warning. I told my friends, if I ever have a nervous breakdown, to tell the press that they’ve known me as nothing other than a sane human being.

I gave my friend, Chris, nearly $2000 to join this hipster cult. Just kidding about the cult part. I’ve spent a good deal of time reading, visiting, and talking to IHOPpers, and I find this place a very effective and an understandably flawed church of young and passionate people. I never understood the cult-phobia.

Before that, I’d seen their headliners speak at a Chinese church in Fremont and visited the next biggest IHOP, in Atlanta. The main IHOP HQ is in Kansas City, Missouri. 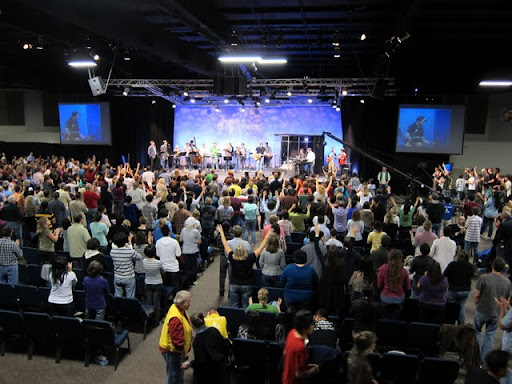 As I state in my other posts, I don’t fully accept their teachings, but I like the people there a lot. At this point in time, I’m lucky to have been intellectual about the whole thing, as IHOP has unfortunately been dealing with bad press the last couple of years in regards to a rogue member who turned out to be leading his own sex-cult on the side and possibly had his wife murdered.

Horrible doesn’t even begin to describe the circumstances of the people involved.

I have a friend who moved there to work with IHOP in Kansas City. I, myself, told colleagues that I considered going there. It was like some sort of hipster monastery. Everyone in the prayer room looked as if in a constant state of being in love.

Meet Kendall. I met him the last time I visited IHOP, over new years in 2010. He was awesome. I won’t retell the whole story, but I made so many friends on that trip. You can read about it here. That’s all to say that of the stories told about the terrible turn of events in the last couple years, I trust Kendall’s the most. I trust him simply because I spent a week talking to him, and, reading his words, they sound as honest as a person could be.

Just a couple days ago, RollingStone posts an article called, “Love and Death in the House of Prayer: Tyler Deaton, a self-appointed apostle in one of the fastest-growing evangelical movements, loved Jesus, Harry Potter and, much to his dismay, other men. When his wife turned up dead, the secrets began to spill out”

Now, up until a few days ago, I’d always wanted to run off and join this hipster monastery, because it sounded like a cool thing to do. Of course, my peers thought it’d be weird. I remember a conversation (with my intellectual friends) over sushi, where I was planning on not eating any of their food or drinking their water, in case I was being drugged to hallucinate while there. I met some awesome people there, Kendall being one– a person who was very independently and critically minded. Like I said, I trust his point of view.

Good thing my (very) public opinions come from a skeptical perspective. One commenter, Ginny Wilkerson, responds to my journal entry from the 2010 trip:

I read your IHOP blog. It was really cool! Which one are you in these pics? Sneaky standoffish person that you are, you are probably not in any one of these pics.

I found you on google, and clicked on it thinking it was another negative about a ministry that has already gone through a lot of warfare to get where they are. Where they “are” is the prayer room. Really, all the other ministries just flow out of that, if you ask me. (i know you didn’t) because prayer is a ministry in itself and if you are an intercessor, it IS da bomb. Now if you are an evangelist or a prophet or a teacher, preacher, you would find it lacking unless you realized that you can get instruction for your ministry and prayer there.

My Grace-centric friends posted the recent RollingStone article as a critique of over-bearing amount of “religion” that IHOP preaches (which is a bit off-topic, in my opinion). As I read secondary accounts on the RollingStone article, I realized that this was actually first-hand experience from Kendall. Someone I knew had been good friends with the alleged cult-leader, since they were both affiliated with IHOP.

It’s worth reading just to see how someone’s experience is a combination of three different narratives.

Over the course of a week I believed three stories. Now, I believe none of them and all of them.

1. I still got a phone call from a friend and teacher to tell me the wife of a good friend, Bethany Deaton, was dead.

2. The distance—theologically, ideologically, professionally, and influentially—between IHOP and Tyler Deaton was exaggerated to save IHOP the negative media attention the death of a young woman brought and the questions it raised, and

3. Ultimately it was the cult-like nature of Deaton’s group — involving sexual practices, high pressure religious discipline, and control from a self-appointed apostle that — when broken apart, revealed itself as the cause of Bethany’s death.

Now, the RollingStone article is quite gracious towards distancing IHOP from this rogue cult-leader, but Kendall was reasonably less forgiving:

And the suicides. I know of at least one intern who committed suicide shortly after completing an internship, yet he had moved home and nothing else was said of it. I heard that a student allegedly committed suicide between their first and second year at IHOPU, never coming back to classes. It was never addressed. IHOP may not be totally to blame, but at the same time the physical and psychological effects of their teachings and schedule — fear of the end times (when, says Bickle, Jesus will kill half the earth’s population), urgency to prepare for the Great Tribulation, coupled with a rigorous schedule of fasting, dense classes of IHOP’s Forerunner Curriculum, long hours in the prayer room — all certainly have a cumulative effect.

Narratives are like the stock-market. Here were two narratives I wished I was a part of until their stories crashed. I either dodged two bullets, or I’m simply lucky to see, by example, that we can’t idolize our image, since we don’t live in a perfect world. The eye of the beholder can be ruthless.