I think it was Lou Engel that said, “Redding is the closest place to heaven on earth.” On a side note, I’m probably not one of Lou’s biggest fans currently, just b/c I get some of his politically radical emails. I do find this description of Bethel Church, in Redding, CA, informative. I first heard of Bethel through that “Finger of God” documentary, then through people I’d met through a house church. Joaquin Evans, from Bethel, had visited not long after which was quite an introduction to their culture. 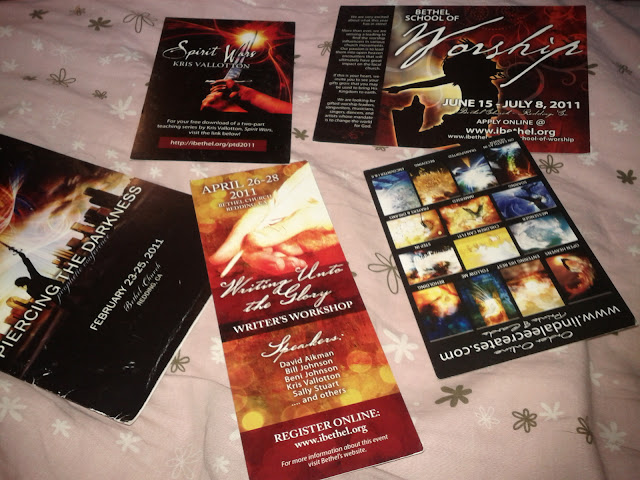 I remember Zwak and I remarking about how Bethel propaganda seemed a bit wizard school. This comes from the language they use and their choice of aesthetics in graphics and design. Recently, a well respected Christian minister expressed the opinion that:

one of our students just returned from a trip to bethel and shared some things which troubled me, things i regard as unbiblical, about the prosperity gospel, and about christians taking control of segments of society.

First, I’d like to say that the “normal police” seems to always sound their sirens at boldly expressed maverick ideas, regardless of possible legitimacy. With a grain of salt, I did once point out that Bethel is a bit extreme in how much limelight they give the supernatural– to which a man’s response made me feel that I was judgmental to say so.

In context, I said that it seems appropriate for an over-emphasis on the supernatural, b/c it had been so de-emphasized in the past decades. To me, it is a natural swing of the pendulum. 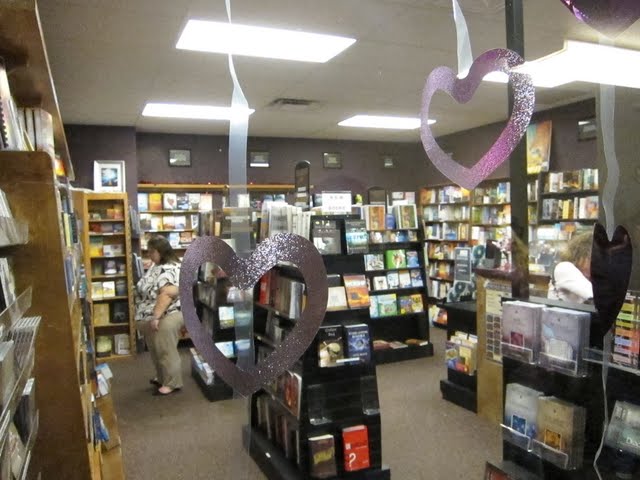 Bethel Church is also represented by the videos from ibethel.tv and the many books written by the pastors on staff there. Now, I think their message is uniquely good and appropriate for this time and day. They give a perspective that has been overlooked in many teachings. The way they deliver this message, however, is entertaining and emotionally engaging, but not always the most rigorously supported.

I don’t think they are propagating lies, but I do find that they speak with sincere conviction about things that an intellectual could easily unravel. My point being that we shouldn’t be quick to cry heretic, b/c I honestly believe, in that regards, they don’t know any better.

I also don’t believe they are absolutely wrong, just that they do not target their rhetoric towards intellectuals. On two occasions, while talking about a spiritual awakening among PhDs and leading experts, did I get the response along the lines of, “God doesn’t need intellectuals.” These responses came from Bethel teams that came out to the bay area, and made me realize that the distaste exists on both sides of the chasm. I mean, God wants revival among intellectuals as well, right?

Anyhow,  Piercing the Darkness is a conference they do for the prophetic. I went last March, right before the Game Developer’s Conference (funny how these highly contrasting events always come in pairs). A leader from the house church was going, and wanted me to come. Of course, after all the people I’d met and all I’d heard about Bethel, I’d want to go there for myself. I believe these conferences cost around $100 (that’s some good money). 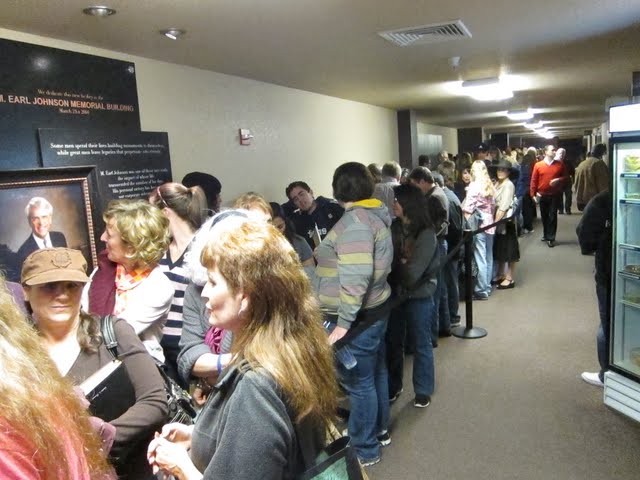 On Wednesday, I packed some food and business cards (enough for both the Bethel and game conferences). I stayed with friends that had moved up there for the Bethel ministry school, all arranged by the woman who I rode up with. When I got to the church, people were lined up for the opening session of the conference. The International House of Prayer in Kansas City has a similar movement going, and immediately, the biggest difference I noticed was the age demographic– the people attending this conference were a bit older. 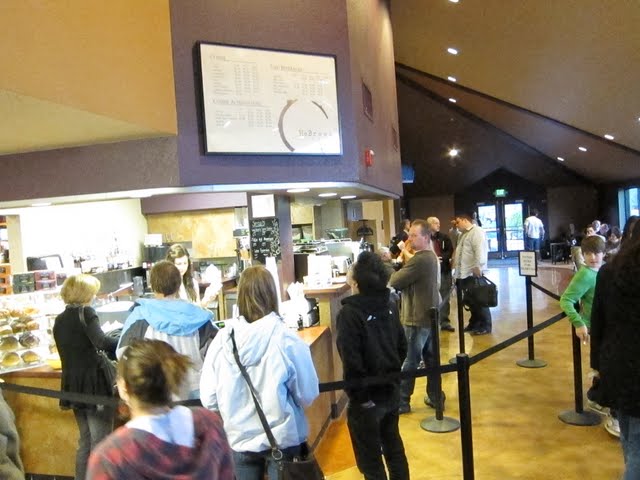 Right when I got there, I met an old friend in the church’s coffee shop, cleverly named, “HeBrews.” It was Hazen, the guy I’d met in Atlanta, who I’d seen again at TheCall in Sacramento, onething in Kansas City, and here in Redding, CA.

The first talk was given by Joseph Garlington, and seemed more like an induction into the circle of this community of preachers. He taught with a pianist playing gospel on stage, which was exotic to what people were used to and awesome for me. Garlington, more than anything else, felt like the new kid in town at his first day of school.

I feel like much of my exposure to these “communities of higher faith and intimacy with God” began with this “Finger of God” documentary. Despite the unbelievable claims you’d find in this film, I wasn’t too enchanted by it all. It was more of a gradual acceptance with the occasional spike over a period of months. One thing that I found myself doing was meeting the people who were in the documentary. On this trip, I managed to meet the guy in the image above, who claimed that he prayed for a guy who’s finger popped back into place and he regained feeling that he hadn’t had in 6 years.

He was cool and seemed sane, as far as I could tell. 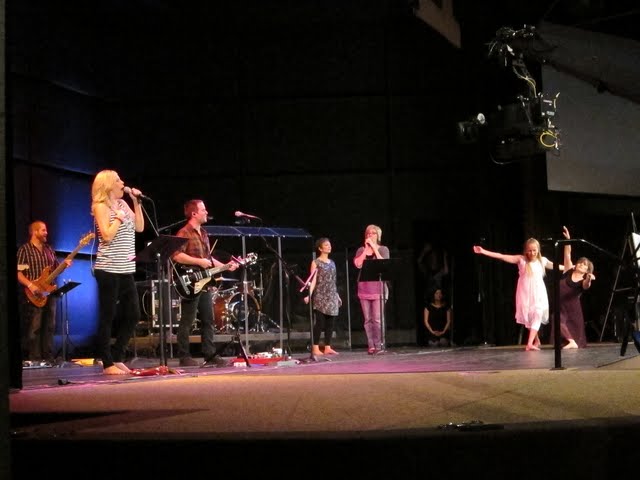 Worship was ok. I mean, by then, I’d been pretty used to hearing these songs and the style of worship. The setup and production are all quite nicely done with dancers dancing and painters painting in both the main and overflow room. 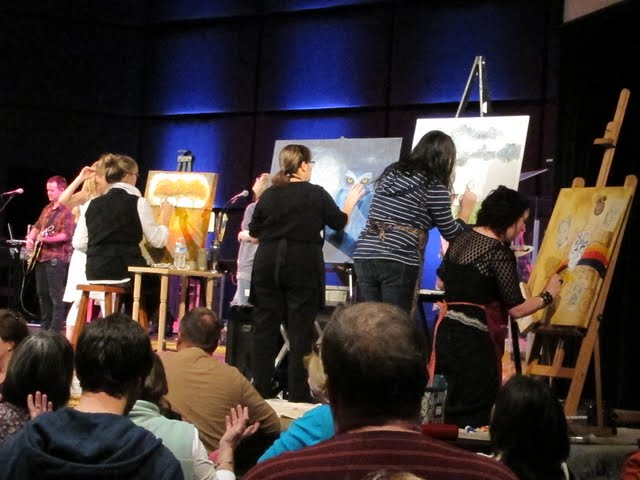 Thursday opened with Kris Valloton, he and Graham Cooke were two headliners that I’d yet to meet in person. I’d already researched a bit on Kris Valloton and his teaching was on a lot of the same stuff I’ve read and heard. Graham Cooke’s talk was quite intellectually satisfying, although his personality may leave a person wanting more. 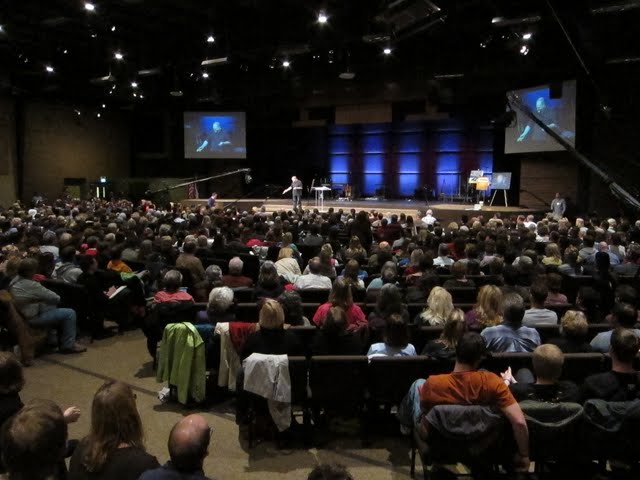 As I do for all these events, I printed out blog posts about the PhD students in the bay area and what we’ve been up to. I gave these stories out to all the big speakers that week. Probably, Graham Cooke cared the least. Bill Johnson and Kris Valloton at least pretended to care about my endeavors in academia. Since I was about to go to the Game Developers Conference, I tried to broadcast the revolution going on there as well. 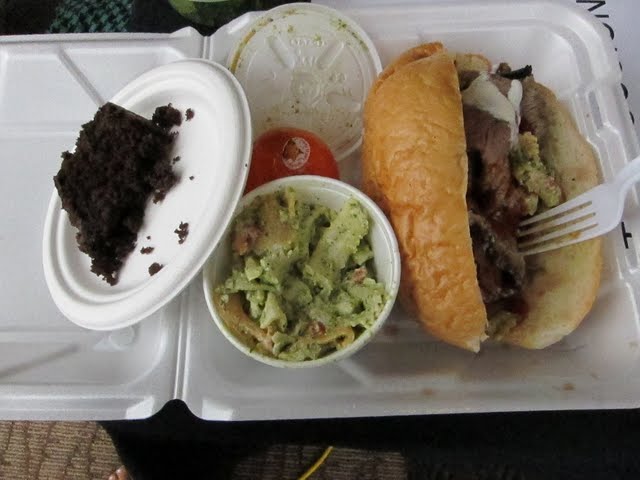 You had to buy these lunch tickets in advance, and then wait in a very long line. It’s pretty ambitious for them to feed so many people. That evening was Bob and Bonnie Jones up to speak. I first heard Bob at this conference. There’s probably a better way to say this but his personality which is majorly a function of his age, makes him a funny person to listen to. If anything, he is greatly respected by the other speakers of the week. I hand wrote him a note as well, just like I did the first time I met him and gave it to his wife the following night. 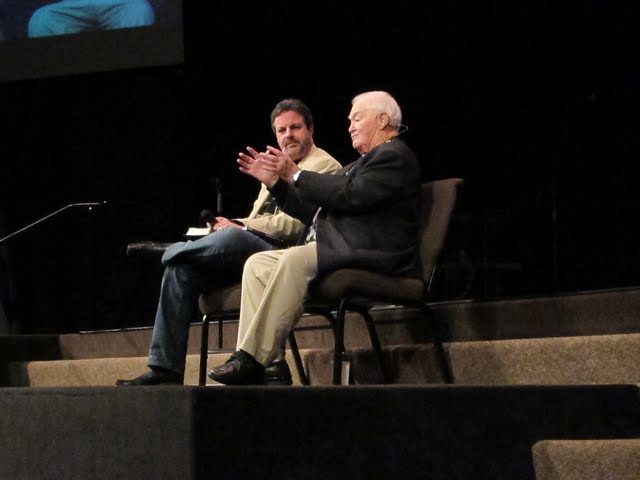 Thursday was: Kris, Graham, Bob/Bonnie, and Friday was: Joseph, Graham, and Bob/Kris, with Bill Johnson being emcee here and there. To be honest, I get restless a lot and would wander around during the speaking, which set off some shadiness alarms especially for this one authoritative looking guy.

I think three things I took away from this conference were: 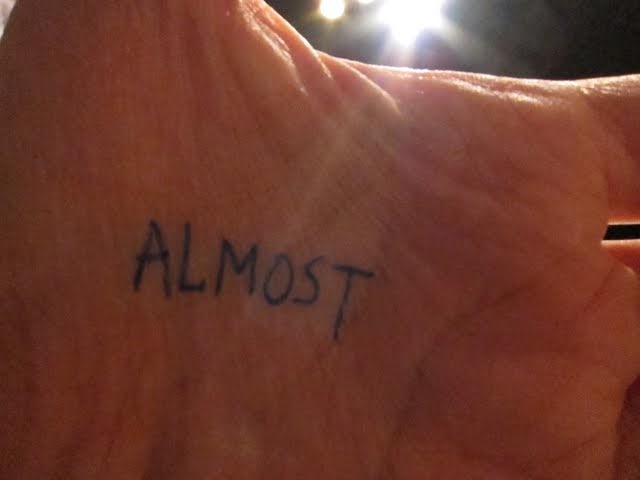 At the end of the conference, I got to help my Atlanta friend get some prayer from Kris. Although, maybe he didn’t need my help, but I wanted to be part of that story, so I helped! 🙂 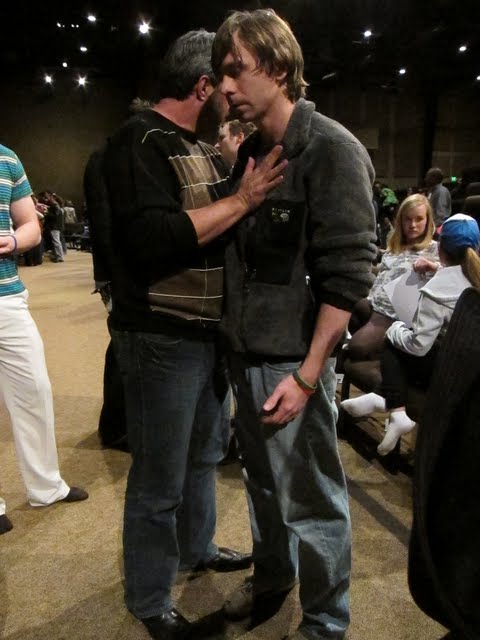 The next day, I had a quasi-unique opportunity to check out their “healing rooms.” I’m not going to explain in detail what those are, but, basically, people with illnesses come on a given Saturday and wait in line to receive prayer. Afterwards, they share all the testimonies for what God seems to have done. 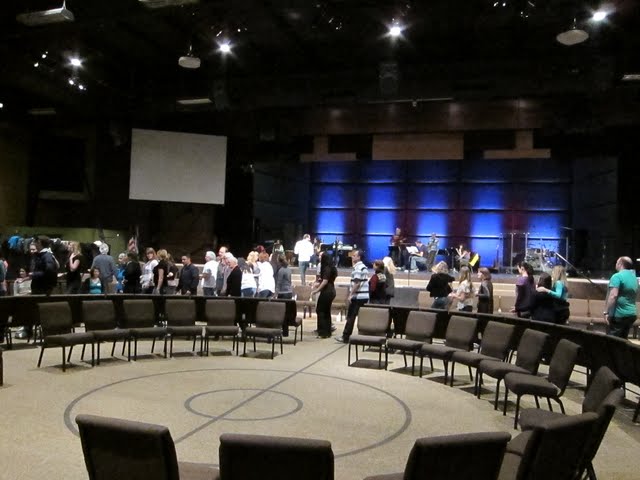 The conference itself wasn’t out of the ordinary. The craziest behavior I witnessed were from Bethel students who were under the influence of the Holy Spirit. After the conference, at the healing rooms, were people a bit more wacky. 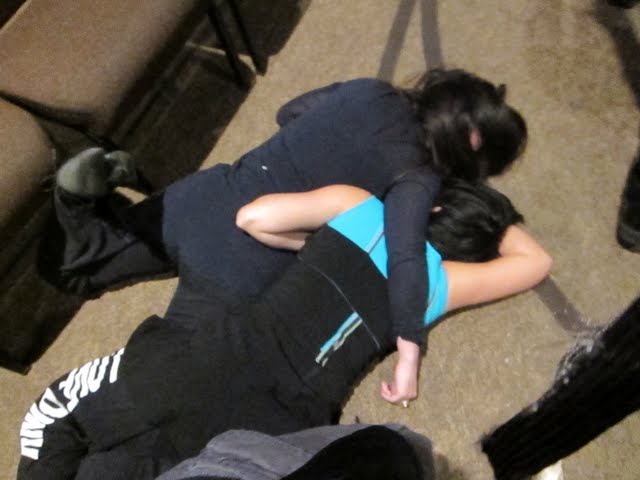 Yes, it’s weird, but I also have no reason to believe that it isn’t God. It’s just interesting, and nothing that I felt offended about. 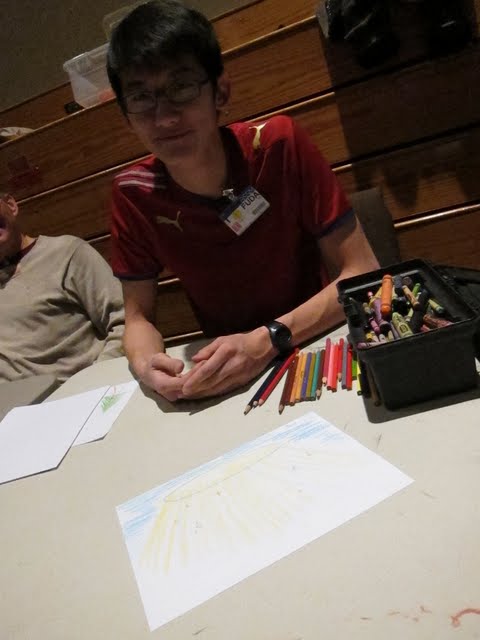 I made one solid friend that trip. His name is Fuda, and he is from Singapore. What a cool guy! The part of the room that I was drawn too was one with color pencils and paper. It was a table for people to get prophetic sketches done for them. Fuda drew for me an open heaven.

Then they brought out the little kids, which was also pretty cool! 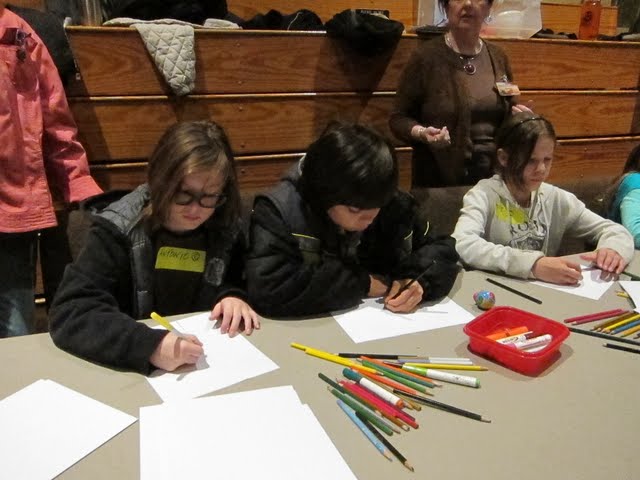 I claimed the kid who drew Pac Man, for obvious reasons. I drew them video game characters too, distinctly remembering one of them exclaiming, “Mawio!” Haha, the lady in charge eyed me down though, b/c who am I to be proclaiming things from God? They didn’t know me. I could be a nut! 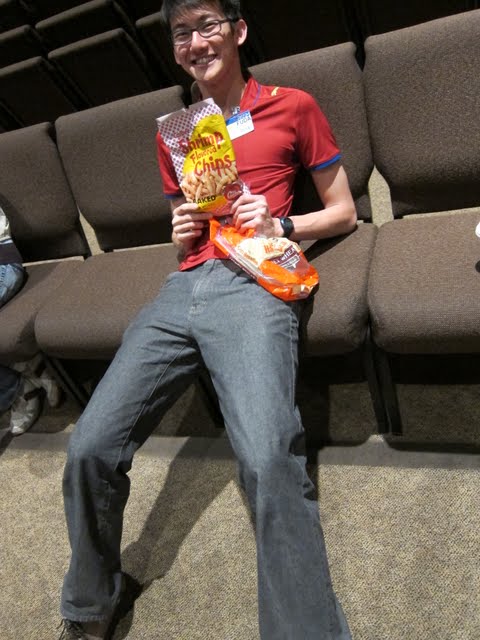 I left my new friend with a bag of shrimp chips.. haha. I got dropped off at BART and took it to my Grandma’s house where I prepared to go to church with her the next day in Oakland and then to the Game Developers Conference. 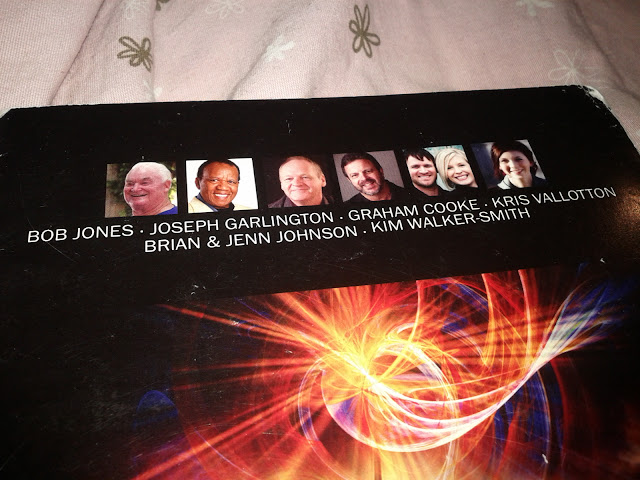 One thought on “Bethel Pierces the Darkness”