Ok, so I don’t mean to call anyone an idiot; I’m just saying that most of the explanations of faith healings are poorly presented. I mean, these healings happen so much, you’d think that someone would be documenting them better.

So, how much evidence do you need?

I imagine someday, while making a point about the power of belief systems, asking the audience of PhD’s to consider a hypothetical situation. Let’s say I present the story of a man with stage 4 esophageal cancer with a few months to live. As unbelieving as he was, his son convinced him to visit a prayer room, and upon receiving prayer, he falls over and wakes up totally healed. In fact, I have all the medical documentation that you could ask for. On top of that, now this man prays for people and THEY get healed of blindness, deafness, feeling in the limbs, and cancer.

1)      You’ve always believed in the supernatural, and faith healings are no big deal to you

2)      I’ve just changed your world view away from naturalism

3)      No matter how much evidence I give you, you will find some way to keep your old belief system

Haha, I’ve been in my field long enough to bet that I may be the only person in that room, who believes that people have been, will, and can be healed by faith. I know the people I work with long enough to know that the whole room would be of the 3rd persuasion. That is all to say, that it doesn’t really matter how much evidence I give you, but for my sake, I’d like to remember my own stories and experiences.

Naturalists, however, aren’t alone in their refusal to consider the possibility of faith healings. Most Christians I know don’t believe that this happens today. In fact, the Christians get even MORE offended than the naturalists. It’s all so irrational.. hahaha. Seriously, faith healings are talked about so much in the New Testament; you’d wonder what Bible these Jesus people read.

I was opened to the idea of healings, but I didn’t have the level of faith, nor the evidence to fathom how much of it happens around me. In my previous post, I gave a recount of the entire experience of healing encounters, up until this past year.

In June, I was at a conference with some of the smartest and creative PhD’s and researchers at the Assilomar retreat center in Monterey for the Foundation of Digital Games. Unintentionally co-located, was a group that wore nametags which read, “Bible Seminar.” Out of that cohort, I don’t believe there was a person under the age of 40, mostly 50+.

One of my colleagues says, “There goes Sherol, networking with another conference,” as I went to go sit with people that I had no reason to talk to.

“What group is this?” I ask. “It’s the Church of Christian Science,” the older man says to me. “Sounds familiar,” I think to myself and ask, “What is this church known for?” “The man pauses and responds, “We’re typically known for our stance on miracle healings.”

It took me a bit to realize that these were those people known to not take their kids to doctors and reject all medical treatment in the name of faith. “How radical are these people?” I wonder.

There was this table of women that really loved my questions. Personally, their answers to my questions weren’t very satisfying, although one lady gave me their supplementary scripture. Now, looking back, I think my mentality is a bit disrespectful of what these people were so passionate about.

I mean, maybe they’re unusually right about one thing or another; however, if that is the case, they weren’t convincing in how they’d explain the reasons why we live or exist. As I come to know more about Christianity, the focus on Jesus only grows more significant. The Christian Scientists placed more emphasis that we are already good, and that darkness isn’t the enemy of light, just the absence of it. Fundamentally, I have a hard time accepting that evil doesn’t exist, nor do I admire Christians who put Jesus in the back seat.

Perhaps, they were just being more Universalist, because they didn’t want to turn me off; though, good logic is better than vague explanations. For example, they explained life as being in one room and death as just opening a door and walking into another room. These explanations seem to make their believers feel better about life, and less of a reason to live. I guess I’ll have to post my own answers someday to these questions to show what I mean.

I remember going through their Christian Scientist book with my roommates, these are Atheist and Agnostic PhD students in Computer Science and Molecular and Developmental Biology. I’ll consider that we may not have been fair to poke fun at their definitions surrounding faith healings, but its presentation could afford to be either (1) more inspiring or (2) better supported. 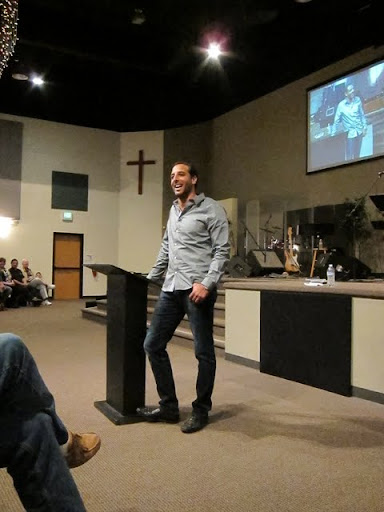 A couple weeks later, after a friend had mentioned IHOP, I found that the International House of Prayer was having an event in Fremont around July 4th for Asian Americans. There, I picked up my first book on the prophetic, by Mike Bickle (more on the prophetic another time).

A few days after that, I found myself sitting in the lobby of a foursquare church in Santa Cruz, waiting to hear some guy from Bethel, named Joaquin Evans, talk about healings. Right before the event, I was reading the chapter on how God chooses who he uses to give which gifts too, and often it’s not who you’d think. In fact, you may often be quite uncomfortable with the sort of people God chooses. Haha, there was no way I could ever have pictured what Joaquin Evans turned out to be.

Dave Gschwend opened the night, giving Joaquin some introduction along the lines of being the bubbles atop a champagne glass. Joaquin laughed his way through the night and, uh, yea, I was like WTF? He was so happy and full of joy, and I was so weary and bitter. You can imagine my disbelief and hesitation towards all of this.

Joaquin and his team told story after story of unbelievable miracles—blind eyes seeing and deaf ears opening. These stories can be found all over the internet, personal account after personal account with medical documentation that evidences healings of faith. Additionally, people there at the event were claiming to be healed of pain and having legs grow out.

So, where am I at with all this? Haha, I need to write shorter posts, or I’ll never get anything done, but, it’s been a year and I’ve seen people healed for myself. I pray for them and their pain is gone. I can’t explain it at all. When I pray now, I see people weeping, I see people regain hope. Before all this, I didn’t even really like praying for people… It seemed like such insincere gestures. Now, my friends and I have weekly stories with strangers and friends, completely blown away by the results of faithfulness and love.

A year ago, I met Ricky Larson. He gave his testimony with the Bethel group. He had stage 4 cancer and was healed by a young boy up in Redding. Shortly after his visit, he decided God wanted him to move to Santa Cruz. I remember the first time he came to visit our group, said we were full of love here. I walked right up to him, in my unbelief, and I asked him 20 questions in regards to how he could’ve possibly been healed through prayer. Now, he prays for people which result in stories of the most amazing healings. I don’t know what else to tell you, but that his medical reports are accessible. Let’s consider the possibilities:

The only other explanation I can fathom is that acts of faith somehow activate healing agents from our brain that can grow out limbs, restore sight, and cure cancer– I would consider that naturalist explanation. So, if you’re wondering why don’t people just get prayer instead of remain in pain, I’m asking myself the same question. If you think that if this stuff were true, you would have experienced it for yourself by now, I’d say, “you CAN experience it, why choose ignorance? haha.”

Sure, not everyone gets healed, but that doesn’t change the fact that so many do. Just read the Gospels and meet my friend, Ricky.

18 thoughts on “Healed by Faith, Explained by Idiots”